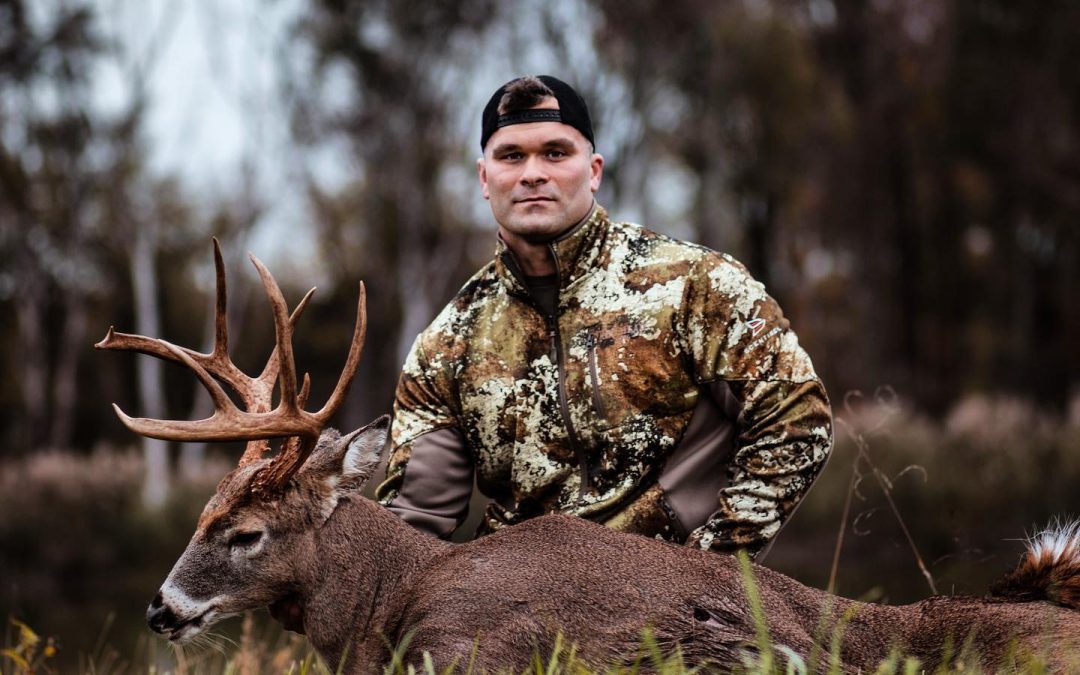 I started as soon as it was legal for a kid to in New York, probably around 10 or 12. Since I could walk, I wanted to shoot stuff. I even had a pellet gun and shot everything from cans to paper targets whenever I could. My father taught me everything there was to know about hunting. I was a baby, and he would wrap me up and take me out everywhere with him from the tree stand to ground blinds. When I got too heavy for him to carry, a lot of times he would go hunting with my brother and I would be waiting by the door for them to get back and just find out everything they did, what they saw, and if they got lucky, I was all over it. Sometimes I would go out with them and help in a deer drive before I could shoot, and I would just walk through the woods, loving every moment of being a part of it. Eventually when I could hunt, it became an addiction, and only grew larger and larger as time went on.

When did you know that it could be a part of your career?

I didn’t have an exact time in place where it occurred to me, I just kind of knew I always wanted to do what I love most, which is hunting and put into my career somehow. I grew up watching the sportsman channel all the time, watching guys like Bill Jordan hunt for a living and inspire people like me just always was a dream in my eyes. Watching Bill’s son, who was around my age, only further confirmed my dreams of wanting to go after that. Once I got experienced enough and I became confident in my hunting skills, I was not afraid to pursue that dream and really take steps towards it. I am a police officer full-time, and I love it, but if I could give it all up for hunting, I would in a heartbeat. I need to eat, sleep, breath, and hunt.

Hands down hunting. Hunting gives you the opportunity to be more in tune with the animal. When you’re fishing, you’re either on a boat or shore, and you have no clue what’s underneath that water, you’re just waiting for something to bite, there’s no connection prior with the fish at all. The amount of time and effort you spend on spotting, tracking, recording, and hunting just one deer is so much more challenging and really gets you connected with the animal you are going after. In Jersey, it’s very pressured so you have to spend as much time as you can on the deer you’re going after.

There was one specific deer that gave me the hunt of my life. His name was “Waldo”. This deer was a ghost to other hunters, and I was determined to get after him. I put trail cameras up everywhere, I amounted to about probably 30, and even borrowed some from my buddy who wasn’t hunting anymore. I had a late run-in with the deer previously in September and had a risky shot, so I did not take it, but up until I got him, I would never let it down, and it ate me up inside so bad. I would go out everyday hunting, from opening day to November 8th when I shot him. I would lose sleep, and even fall asleep in the tree stand at times. The day I shot him, he came chasing after another buck and a doe. I shouted, stopped him, and just like that I finally bagged Waldo.

What is your favorite hunting experience?

I did a food plot for my father, and we were going after a non-typical 14-point deer. We finally set up in the stand and were waiting for a while. Finally, we saw him, and my father dropped him on sight. It was so much fun getting to see my father get that deer and just be able to give back to him an experience like that for all of the experiences and knowledge he gave to me. Especially, getting it on video was big too, I’ll forever get to live that memory over, and over again.

Do you think your last name “Bow” is fitting?

Funny thing is, it’s not my actual last name! My real last name is Bolognese, but one day when I was a kid my sister just said, “You like deer hunting so much, you should just say your last name is Bow, instead of Bolognese.” I took her advice, and I would write my name always as Dom Bow from then on. It’s funny because when I graduated high school, some of my friends were shocked when they called up my real name, they had no clue!

What would you recommend to hunters that are just starting out?

Hunters just starting out need to learn from experience and have patience. One of the best ways of learning from experience is doing it with someone who has a lot of experience hunting who can teach you a lot. You can’t just start shooting stuff without any idea of what you’re doing or without a plan. Hunting is hunting, not killing. Start off small with what you hunt! It’s not about the size, but the knowledge you gain so you can hunt successfully. The most important element of all hunting and life in general, is safety. You cannot go hunting without practicing correct safety measures. A bullet or an arrow is not stopping until it hits something, and we’re pretty soft! Do not go into a hunt without knowledge and safety, because it can turn upside down very quickly.

I found out about Trent through a mutual friend. I watched all his outdoors content and knew right away that Blitz Outdoors was something I wanted to be a part of. I only work four days a week as an officer, so I knew I would have the time. I believe in the philosophy of if you do not ask, you’re not going to know. I went by that, and I messaged Trent through social media if he needed any hunters to be a part of the team and he welcomed me with open arms, and I’ve been running with this ever since.

I want to do what hunters on TV did for me when I was younger. If some kid out there can look up to me like I looked up to guys like Bill Jordan and inspire young kids out there to learn from me and pursue hunting for themselves and be passionate about it, I know that I did right at what I’m doing.